LEATHER® – Become a rookie boxing manager with something to prove, working to establish a stable of talented fighters to take on the world – in LEATHER®: Tactical Boxing Management.

Recruit promising young amateurs, established professionals or retired veterans, challenge favourable opponents, and train your fighters for upcoming bouts. Fights are won or lost depending on the strategy and tactics you devise, so it’s crucial to analyse both your combatant and your opponent to create the correct fight plan. Winning bouts will move your boxer up their respective weight division rankings, to eventually challenge for the world championship belt itself.

But the boxing world is a slippery one; losing bouts will delay your ability to challenge others, ruining your momentum and allowing other promising stars to challenge your position. Suffering injuries during bouts will lower your boxer’s subsequent fitness, meaning they will be less effective in the next bout unless given time to rest and recuperate. Boxers you seek revenge upon might shift weight division, foiling your plans for immediate payback.

Different boxers peak at different stages during their careers, and as time passes your boxers will age and their abilities will wane. Young, fresh-faced opponents will rise through the ranks to challenge your dominance, and wily old campaigners will battle on long passed their best, eager to show they’ve still got it.

The path to glory is not always clear, and it is up to you how you form your fighters’ careers. Do you ambitiously rush them up through the rankings – challenging as high as you can each time, or do you favour a steadier approach – building your boxer’s skills over more contests? Do you favour the breathless punch exchanges of the lower weight divisions, or the thudding power of the heavier ones? Will you dominate in one weight division for a decade, or will you shift your fighters from division to division, capturing as many titles as possible before their skills begin to wane? Do you allow your recruits to retire undefeated at the peak of their powers, or do you keep ushering them on for one more tilt at the big time, long after their abilities have deteriorated?

The choice is yours; there’s no end-game in LEATHER®. The only definition of glory is your own.
* Added CUSTOMISER to edit names of titles, sanctioning bodies, venues, rival gyms.
* New option to reveal your boxers’ weekly ringcraft changes.
* Boxers in the 20s ranks can challenge up/down within those ranks.
* New overdraft facility.
* Added pundit unofficial scorecard option.
* All boxers now have a unique metabolism – coping with the demands of weight management differently.
* Added a new lower level title: “Continental”. 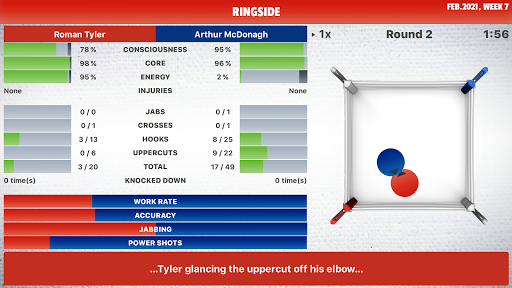