[Game Features]
•Classic Musou Gameplay: Crush your enemies with a single touch! Stunning skill effect brings the coolest fighting experience.
•9V9 Team Battle: Real-time massive multi-players online PVP. Invite your friends to fight together.
•Collect & Cultivate: Cultivate and awaken dozens of famous generals. Unleash their real power.
•Exclusive Fashion: Customize your hero. You are not only the strongest, but also the coolest.
•Wings & Divine Weapon: Forge the wings and Divine Weapon, summon the ancient magic power to become stronger.
•Guild Battle: Use various strategies to match the heroes freely. Different matches bring different battles. Fight for the glory of the guild!
•Cross-server Guild War: Lead your guild to fight across the server. Your friends and enemies are all over the world. Who can become the final winner?
•Fair Arena: Adjust and balance the attributes of all officers. And there are some time-limited Free officers for you to experience. A fair test of your real power, show off your fighting skill.
•Mount & Bloodline: Summon and cultivate the mount; purify the mount bloodline to improve the attributes greatly and change its appearance freely. A true hero deserves the best mount!

-New Gameplay-
Brand new Battle Royale mode [Seize the Seal] is ready for you! Collect resources and fight against other players in the battlefield. Survive and slaughter them all, be the last one standing and take the throne!

-New Cultivation System-
Push your limits again, strengthen yourself with Genius system! Dominate the world with a cooler appearance and stronger power! Fight in a stylish way!

-Intense Battle Mode-
One Versus All! Smash your enemies like mowing grass on your mobile phone. Fast battle pace, control your heroes to cast their unique skills. Wipe out thousands of enemies with a single hit!

-Legendary Heroes-
More than 50 heroes from ancient battlefields are waiting for your command. Every hero has their own way to fight, choose wisely! Awakening mode, a breakthrough of the hero’s power! Reach the full potential of the heroes!

-Various Game Modes-
Real-time Co-op and PVP, intense battles. 9V9 real-time PVP, cross-server PVP, dominate the battlefield with your friends.
Giant Boss fight. Hunt them down with your outstanding control! No one can hold you back even the demons! There are more game modes to challenge. Can you be the hero of all heroes? 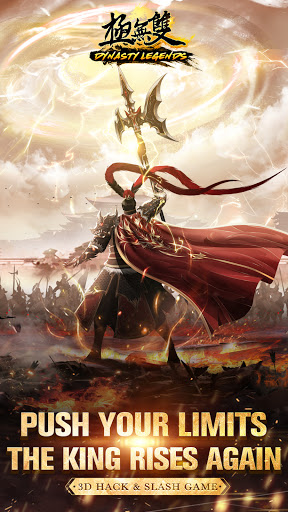